So. If you are looking for more excitement after the whole tofu debacle, I am sorry to have to disappoint you. There will, hopefully, be NO MORE TOFU NONSENSE happening in my life. My poor heart cannot handle it.

Anyhow, this is about our sixth wedding anniversary. Also known as the anniversary where we did not exchange gifts. It’s probably not the first anniversary that we have celebrated without any gifts but then again, it’s not like we need a tangible “gift” these days. Truly, the best gift my husband can offer me is his presence at home at 7pm on weekdays. Handling two littles in the evenings after work on my own – feeding them, bathing them, putting them to bed – can be a hair-tearing affair. At any one moment, someone is crying and demanding my attention.

But that’s another story for another day.

For our anniversary, I decided that the best thing I could do for Mr Thick – and myself – is to treat us to a good lunch sans kids. That’s right, we get to order food that we want to eat and shove food only into our mouths. We don’t have to distract a crying child or scold an errant child. We would get to eat in peace and with two hands.

At that time, I was seriously craving some steak. I blame it on my pregnant girlfriend, who kept talking about her beefy needs. Most of the good steakhouses were not open on a Sunday afternoon, however, and we couldn’t do dinner because Aidan would never let anyone else but his parents put him to bed. So lunch it had to be and after some serious searching, I decided upon Wooloomooloo‘s weekend brunch.

For $68++ per person, you get to tuck into a five-course brunch. And what a fine brunch it was!

For the first course, I opted to have eggs benedict while he had the fried hen’s egg. 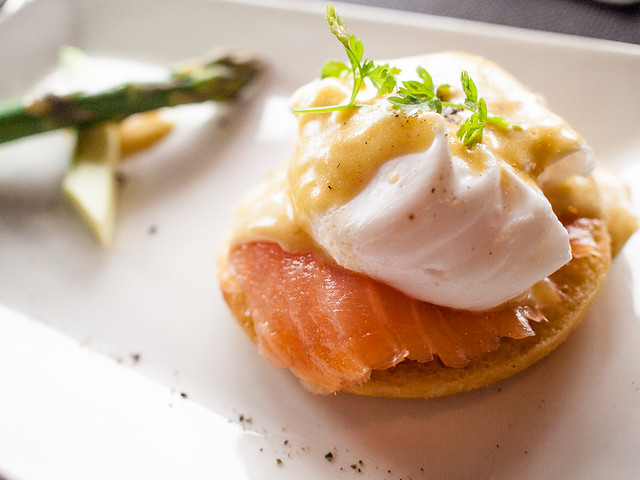 The eggs benny paired with the smoked salmon was a simple dish that was done excellently. I really liked the accompanying grilled asparagus and I am not even a fan of asparagus to begin with. Mr Thick’s fried hen’s egg was not the main attraction of the dish – instead, it was the little hash brown, tomato and avocado mountain that he enjoyed most. 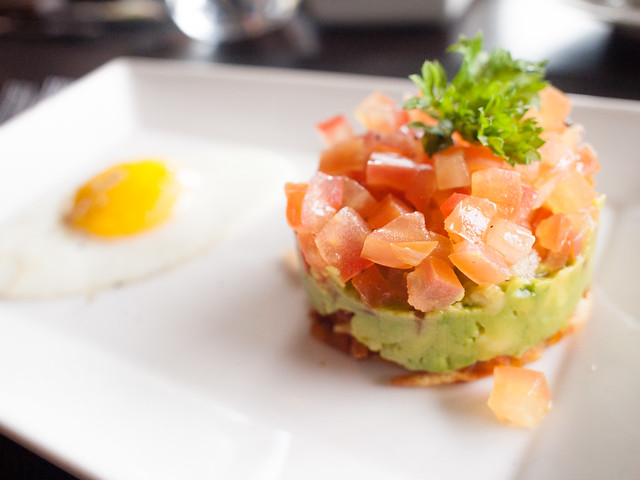 After the plates were cleared, I was presented with my choice of soup/salad: lobster bisque. 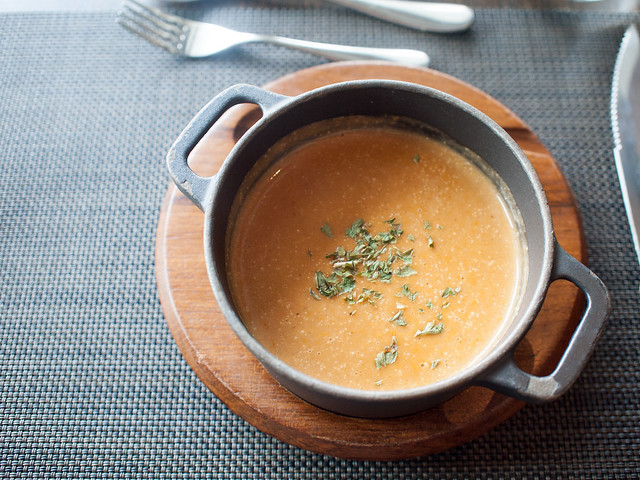 It was marvellous! There were generous chunks of lobster in the soup and it was robustly flavoured. My only peeve was that it was a tad too salty.

He, on the other hand, decided on the Wooloomooloo Tuna Nicoise salad. Which was nice but did not blow his mind. Well. He’s a meat guy, after all, and it would take a super fantastic salad to impress him. 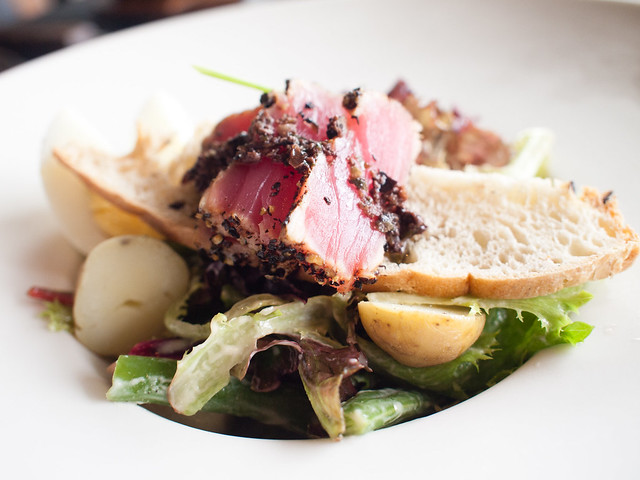 My choice of appetiser was a no-brainer: HELLO OYSTERS!! I haven’t had one in more than a year (pregnancy and raw foods don’t really go) and I was thrilled to have some. These were some excellent oysters too, all fresh and sea brine-y flavours exploding in my mouth. 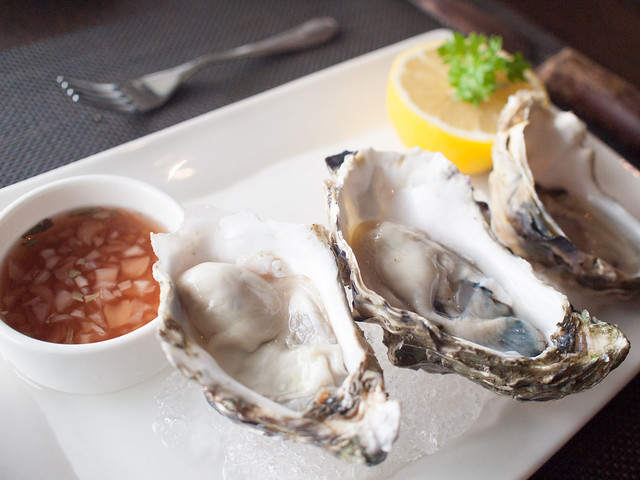 And because I was also eyeing the wild mushroom risotto, husband kindly ordered it for his appetiser even though he’s not usually a fan of risotto. See? No need for gifts, a simple gesture like this will do! 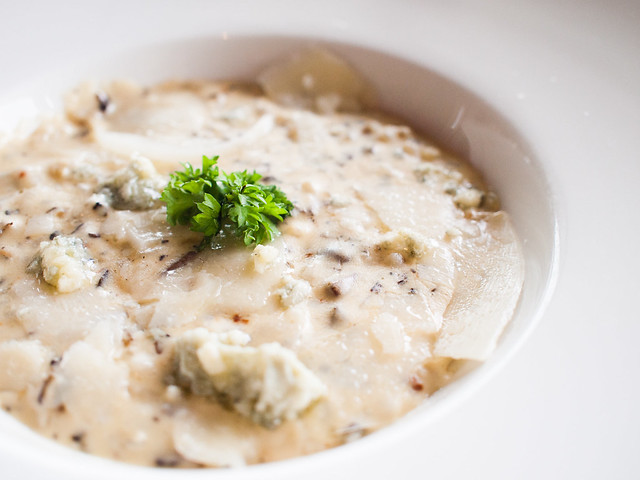 Oh man. The risotto. When it arrived, he took a whiff and said, “WAH. Potent.” And it was. The cheese, oh the cheese. I love smelly cheeses and the Stilton was so amazingly pungent. We thought that it was just a fantastic dish. Thank goodness that it wasn’t a full-sized portion though – you can and will feel a bit sick of the creamy risotto midway through devouring it.

For the main course, it was a no-brainer: BEEF! I chose the Australian grass-fed filet mignon while he picked the Australian Black Angus vs. USDA Prime Sirloin. 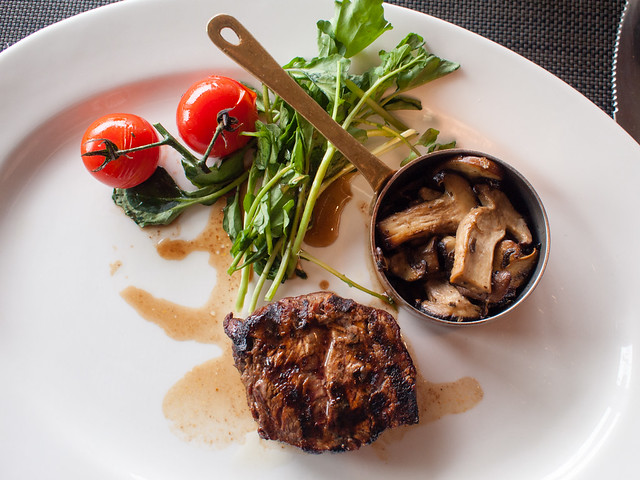 Unfortunately, while I had requested for my steak to be medium done, it arrived on my table pretty well-cooked. The waiter sent it back to the kitchen when I pointed out the mistake and my dish finally reached me in the correct doneness. And it was DELICIOUS.

So was his beef, apparently. 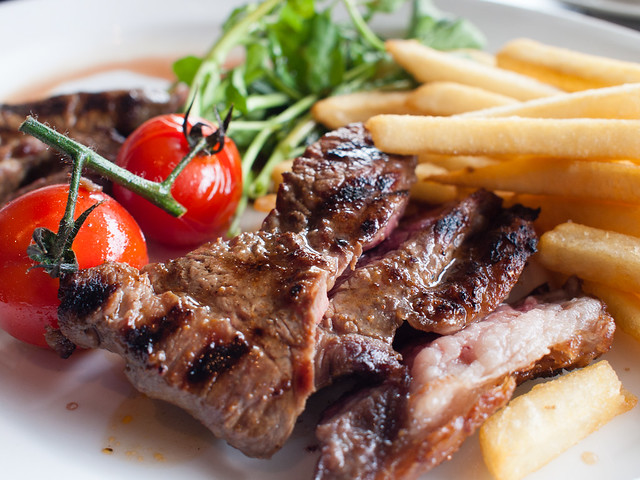 By the time the desserts rolled around, we were stuffed. We could not finish the Wooloomooloo cheesecake and bread & butter pudding, as yummy as they were. 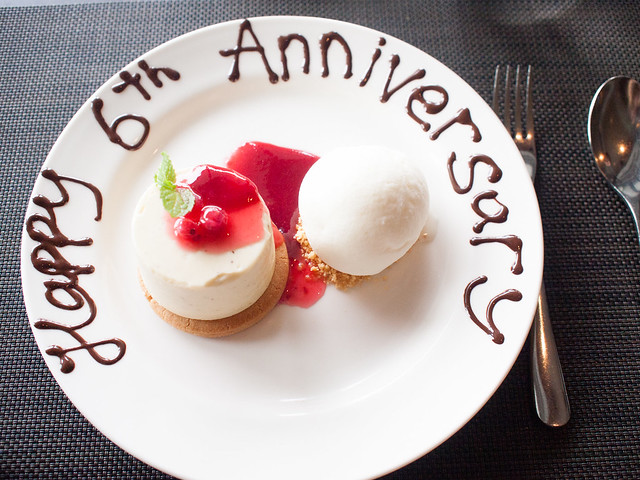 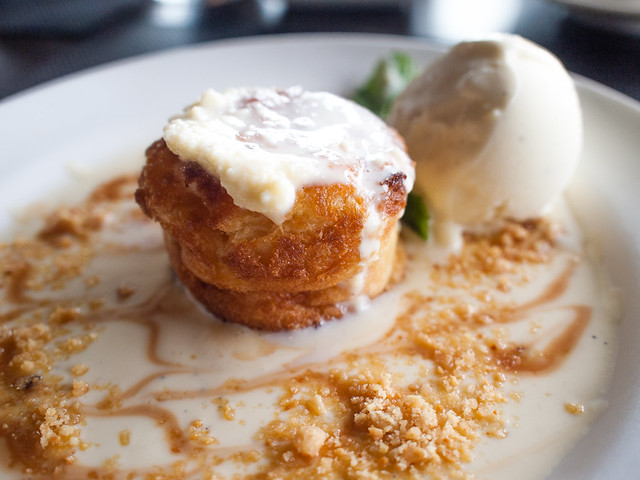 What made this even more special was the wait staff’s attention to detail. I had indicated that it was our anniversary in my reservation and they did up the dessert ever so nicely for us. And the maitre’d promptly fished out a camera to take a photo of us with the cheesecake and had the photo printed and framed for us in a jiffy. You could tell that this was a very professional and well-oiled machine, although it could have been a warmer machine (they were very polite but also very brisk and non-smiling).

At the end of the meal, we were two very happy persons. It was great being able to spend time alone with each other AND have a great meal at the same time. I mean, we got to rock up to the restaurant all scrubbed up and in our Sunday best. I was actually wearing a jumpsuit! With makeup on! And carrying a – get this – CLUTCH. Awesome or what? 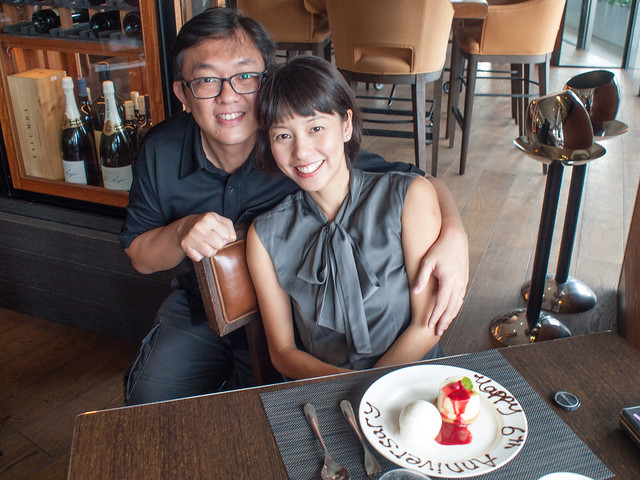 And to cap off this wonderful day? We went home to a baby who had refused the bottle (and was starving) and then whisked the boys off for some grocery shopping at NTUC.

And I wouldn’t have it any other way.