Recently, I had a review with my reporting officer and one of the questions that she asked me was whether I was happy and could see myself staying here for the near future. And I was very honest with her when I said that I would probably work full-time until Aidan enters primary school and then consider my options again.

Did I just kill my career prospects? I probably did, huh.

I like my work, I do. I enjoy it a lot and I find it a very fulfilling vocation. It makes me happy to see my students’ progression over the semester, it makes me glad that I have had a hand in helping them be better at what they do. There are things that drive me absolutely nuts sometimes but in general, it is a very peaceful environment and I am lucky to have a fair, strategic and kind boss. And let’s be real, the job pays the bills, it allows me to continue giving my mother an allowance.

But at the same time, I feel like there’s a lot of other things that I would like to try as well. And I can’t dive into these ventures while juggling a full-time job that takes up all of my energies in the day.

For starters, I would love to spend more time with my boys. At a certain point in time, I would like to be there for them, more than just the two or three hours that we have currently. There is one of me and two of them, and as much as I wish I could split myself into two, my boys don’t get as much undivided attention as I would like to give.

And there’s the writing bit. Let’s be honest here – my writing has suffered since the day I became a mother. I hardly have time to write and when I do, my brains feel fuzzy. It’s like I cannot think straight, I cannot connect the dots and my sentences come out ungrammatical. It’s really tragic!

Now that I have Zac in the picture too, my personal time has shrunk drastically. I have thought about going for yoga instructor courses for a while now but I don’t even have the time to go on the mat. These courses typically require 200 hours of learning, and these are 200 hours that I don’t have to spare.

Then there’s my interest in photography. I feel as if my photography muscles have atrophied significantly! All I take these days are pictures of my boys. As darling as they are…it’s not quite the same. It’s almost as if I can’t compose a decent photo these days, which makes me very sad.

My cousin and I used to talk about running a boutique together too, and that’s another thing that’s constantly on the back of my mind. But we both knew that the business is not conducive for someone bringing up two little people and we put it on the back burner. For now. Eventually, though, I hope we can work together.

So yes, that’s me. With my endless dreams and desires, with my greediness to want to have my cake and eat it too. I get it, I do. It’s currently the season for bringing up my littles and there are some things which can wait until they are older. I don’t begrudge the lack of time now because I know that my kids will only need me for this short period of time. And then I will have all the time in the world to pursue my little dreams.

But until I figure out how I can juggle all my needs and wants and the realities of life, these dreams will have to stay in my mind. 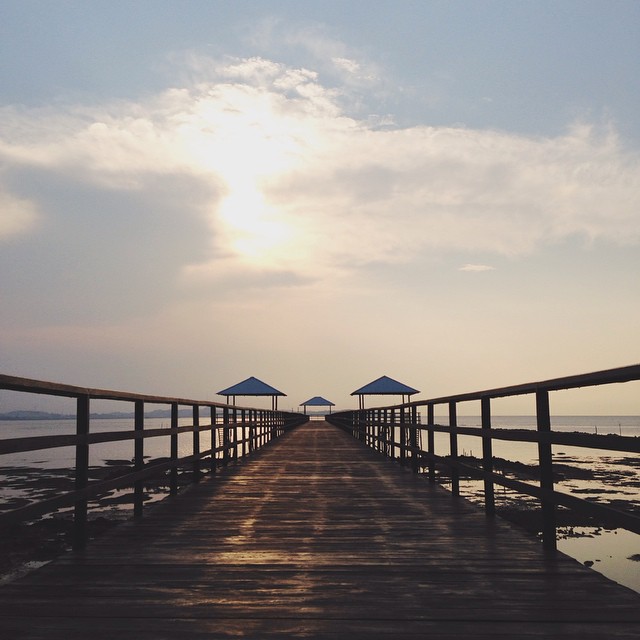 So. Hi. I know that the letter is meant to be written to a five-month-old you but technically, you are 5.5 months old now. And for that, we can blame the weather. You see, whenever I had the time to take your monthly photo during the weekend, it started to rain. We know that rainy days don’t make for good pictures because the light is all meh. So your papa and I kinda procrastinated.

But better late than never, no?

Can I just say that you are such a little darling at five months old? I never thought I could adore a baby as much as I adore your brother but along came you and you stole my heart completely all over again.

All that they say about your heart growing bigger? So damn true.

You, my little bubba, are such a happy little lark. You always reserve the biggest and gummiest grins for your papa, mama and gor gor. We hardly hear you cry and when you do, it’s pretty easy to figure out why – you are either sleepy or hungry. No matter how tired I am after a long day at work, you never fail to light up my day, whether you are simply sitting in your bouncer and kicking your chubby legs vigorously, or when you gleefully kick out in your bath tub.

You’ve also learnt to flip and it’s so fun to see you turn from your back to your tummy, prop yourself up on your arms (AKA cobra pose) and stare at us. That face of yours! Man, you can probably get away with ANYTHING. It’s like, TAKE WHATEVER YOU WANT, IT’S YOURS. Unfortunately, you also fell off the bed one morning because of this flipping business. You somehow flipped, shuffled around (SHUFFLED?! Isn’t it too early for that?) and fell off. Let’s just chalk it up as a one-off incident, mmmkay?

These days, you and Aidan are starting to interact and it’s oh so cute to watch. Aidan would fetch you a toy to play with when you are in the bouncer, or he would rattle a toy to amuse you because you are fussing and “mummy eating dinner”. He also loves to help me bathe you, scooping water in his plastic cups over your Buddha belly. When I take him out of his car seat, he would run over to your side of the car just to “see Zac”. And when I started playing peekaboo with you, he would join in, shouting “PEEKABOOOOOOO!” so loudly he could wake the dead. You would stare at him in such wonder.

And then there was this one day, this magic moment. I was nursing you on the sofa and he drifted close to us. All of a sudden, he leaned in, gave you a peck on the head, and said, “I love you, Zac.”

You know, I’ve always wanted to have a second child but I have never thought about how he or she may be like. When I knew that I was pregnant with you, I was so absolutely thrilled because I thought I would have to jump through a thousand and one hoops just to have a child, the way I did before. And now that you are here, it’s like you fit in so perfectly.

Oh, sorry to be off topic, but did I mention your cheeks? Those droopy sacs of skin that could probably hold a winter’s worth of nuts? OH. MY. GOD. I love to squish them. I love to kiss them.

What the heck. I just love you. LURRRRRRVE YOU. To the moon and back, always. Remember that. We will always have your back. 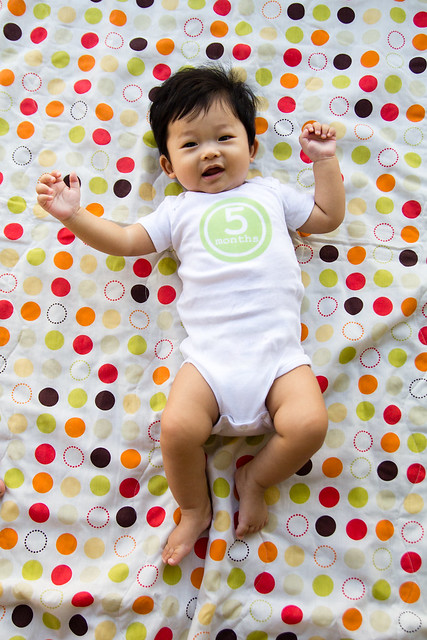 At age 2.5, Aidan is right smack in the middle of the disequilibrium stage. Oh, the meltdowns! It’s amazing how much angst a toddler can have. I mean, he’s only 2.5 years old and it’s like the world is ending if mama does not give him his crayons in the car.

Luckily for my first-born, he is rather amusing and highly entertaining so I haven’t harboured the thought of selling him to his grandparents. Yet.

Just the other day, my mum made curry chicken for the adults for dinner. She especially made a pot of porridge for my little man because he was nursing a cough and a fever. As Aidan and I sat down for dinner together, he insisted on spooning the curry gravy from the bowl into my plate of rice. Well, it’s good for his motor skills and all so I let him. But before I could stop him, he had conveniently dumped a spoonful of the gravy onto his porridge. Urghs!

I exclaimed loudly because, man, what a waste of food. Now he wouldn’t be able to eat the porridge, right?

He kicked up such a stink when I tried to stop him from eating the curry-laden porridge – and this was curry that had an extra spicy kick to it, mind you – that I decided to just let him do what he wanted. Because, TODDLER ANGST.

He proceeded to stick the porridge into his mouth as I sat there, watching him. IT WAS HILARIOUS. His face changed as he swallowed the porridge and without making a peep, he started to feed himself soup as fast as he could.

I quickly fed him some water and gave him a little “I told you so” spiel. But did our friend learn his lesson? NOOOOOOOOO.

He picked up a spoonful of curry gravy again, dunked it into his soup and TRIED TO DRINK IT UP. When I sternly told him that he should not do it because it’s spicy, his face crumpled and he started wailing dramatically.

Well, okay then. I stopped myself and let him drink the soup.

This time, the spice irritated his throat and he started coughing and sputtering until his eyes watered and his face turned red. Mama had to come to the rescue (after sniggering inwardly) and fed him water again to clear his throat. I would have felt sympathetic except, well, he kinda brought it upon himself, no? Very or bee good. After that, he didn’t attempt to ingest the curry any more.

After dinner, however, I thought about it and I realised that Aidan had really taken it like a man. He didn’t cry when he realised exactly how spicy the curry was, and he didn’t whine. He choked on the curry, drank the water and moved on. With nary a complaint.

So yes, I was sort of proud of him. Also, YAY TODDLER ATE SUPER SPICY CURRY! Atta boy!

So the kid has been in school for the past four months and we can see that he is truly thriving after the rather difficult start. He sings all the time at home now, with some hilarious and funny lyrics. 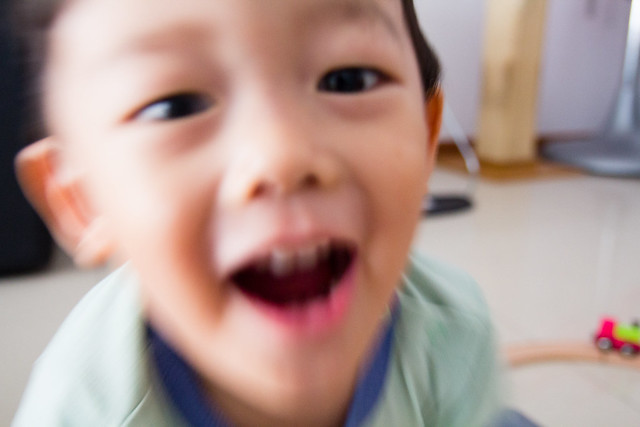