I’ve been meaning to pen my thoughts on my little one’s first birthday but a horrible, horrible illness on three out of the four of us (me and my littles) took away my strength and energy for the better part of two weeks.

No matter, we are all well now and I’ll just put it down as extremely bad luck (and bad hygiene on the caregiver’s part, urghs). I still have the photos to sort out and all so that’s not going to be posted anytime soon. Hopefully before he turns 13 months old, heh.

Something’s been brewing in my mind for the past couple of days though and I really need to get it out of my system. I’m not particularly eloquent or articulate, especially with the lack of uninterrupted sleep, so forgive my ramblings here (you may scoot off, of course, and just ignore me completely haha). Unless you have been living under a rock, you would have known that the Supreme Court in the US recently ruled in favour of marriage equality, ensuring that same-sex marriages are legal in the country. Theoretically, it should not concern me because the chances of such a ruling being put in place in Singapore in my lifetime is as good as zilch. But it does matter to me – I am beyond thrilled. I think it’s criminal that we deny gays and lesbians the same right that heterosexual couples have enjoyed all this while.

Someone once said to me, that it’s odd that I should be so supportive of same-sex unions, being a mother and all in a Confucian society. Ironically, though, it’s precisely because I am a mother that I am even more supportive of equal marital rights to all, regardless of sexual orientation. I always think, what if one day my child were to tell me that he is gay? How would/should I react? The way I see it, my love for him is unconditional. And I should accept him for who he loves (unless he marries some crazy ass bitch, in which case Tiger Mum emerges, hah!). I would very much rather welcome a third son into my family than to lose my son.

Beyond personal ideals, however, I simply believe that everyone should have the right to marry whom he or she loves. Period. Religion should not matter here, this is a question of equality among humans. And frankly speaking, I don’t give a rat’s ass what your God thinks. If this is not a God who advocates love above all things, then it’s not a God that matters to me. Also, I do not see why society sees a need to condone the actions of the gay community. Who are we to sit in glass houses and cast stones?

While I accept that there will always be others who do not share the same views as I do, it makes me sad to see them post articles, words that “justify” their rejection of the ruling. I cannot fathom why they do not see that at the heart of it all, it’s about love, and inclusivity and equality. That it’s about redefining the traditional concept of family and enlarging it to include the different permutations.

Maybe I am dense but I just don’t get it: why would people think that this ruling destabilises families and society? Why is it a sad thing?

Never mind. Like I said, I just needed to get it off my chest, incoherence and all. Anyway, there’s too much hatred and negativity in this world already. Let’s celebrate love, people. Love and Pride. (And I dare you to watch the following video with dry eyes. Okay, I couldn’t. I was bawling.)

Exactly one year ago, I was trying to fall asleep as wave after wave of contractions assailed me.

After 12 hours of labour, Zac arrived and stole our hearts forever and ever.

My second-born has been everything I had hoped for and more. He makes me laugh every single day and makes my heart sing. Every night, I settle into bed next to him and give his noggin’ a little sniff before I drift off into sleep. And in the mornings, I wake to his loud and vociferous complaining that he is the only one who is awake. He sees me crack open my eyelid and bursts into the biggest and brightest smile.

You know how some women wonder if they would be able to love their second-born as much as they do their first? I never had that doubt. From the moment I knew I was pregnant, I was already in love. I knew that I would love him the same way I love his brother, and that I would love him in different ways too.

With Aidan, I approached his first birthday with a sense of relief that we had somehow survived parenthood. His birth had been a huge shock to our systems, our lives, and we had gotten through a year without killing anybody.

But now, with Zac, all I can feel is a sense of wistful nostalgia, that time had passed by so quickly. He’s also my last baby so this feels extra poignant.

Tomorrow morning when he wakes, he will be One. Wow. 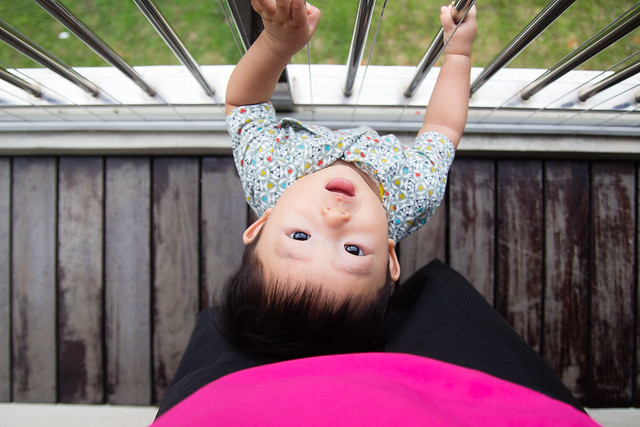 We’ve entered June and the weather’s officially turned. Which means it’s hello to scorching days and sweaty humidity, hello to shorts and tanks and sandals, hello to escaping to air-conditioning.

We marked the first day of June by going on a ride down Lorong Halus to Punggol. Crazy, really, considering that we started so late (the littles took a late nap) and it was blazing hot. When we first started pedalling, I thought to myself, this is going down as one of those mistakes. Yup, we have had plenty of those. You know, when you do something which you thought was a good idea and then once you are in it, you kinda go, Hmm, yeah, NO.

Like when we thought it was a good idea to nap the boys in the car and go check out Some Random Place but the boys didn’t nap and they ended up overtired wrecks once we were out of the car. Or when we decided to go Somewhere Nice for dinner and they were slaying us with their worst behaviour.

I really thought it was going to be a disaster. Plus, Zac was screaming the entire way to Punggol. Don’t ask me why, I think he was just in a snitch. Sort of like, Dude, I was perfectly happy to toss toys all over the house and you strap me into this thing for what?! He wanted me to carry him but clearly, I had my hands full.

So there we were, pedalling furiously and there he was, yelling his lungs out, equally furiously. It was HILARIOUS. I was cycling behind husband, who had him in the bike seat, and I could see the heads of the passersby swivelling towards us to check out the screaming baby. 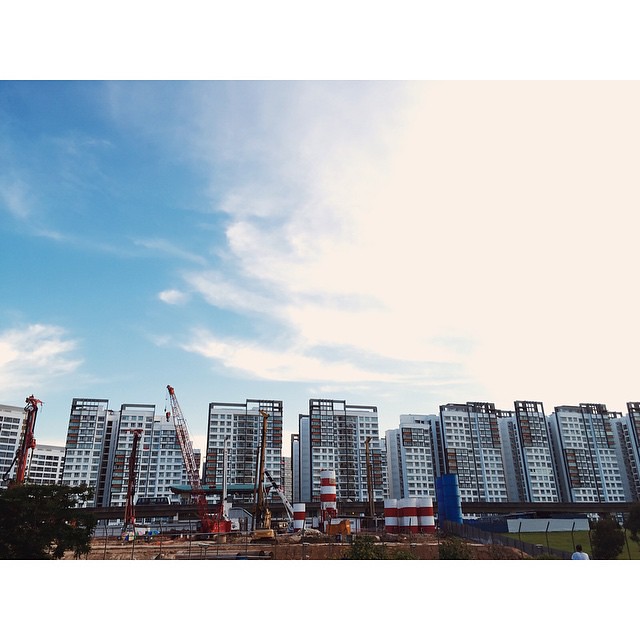 But other than Zac’s vocal exertion, it was a pretty fab ride. The moon was hanging low in the bright, clear blue sky, which thrilled the three-year-old to no end. And then on the other side was the setting sun: a glorious, majestic ball of fire. We quickly made our way to the beach, just in time to see it disappear over the horizon. The boys ate some banana pancakes that I had whipped up just before we set off, we rested our aching legs and we were quietly relishing the moment. 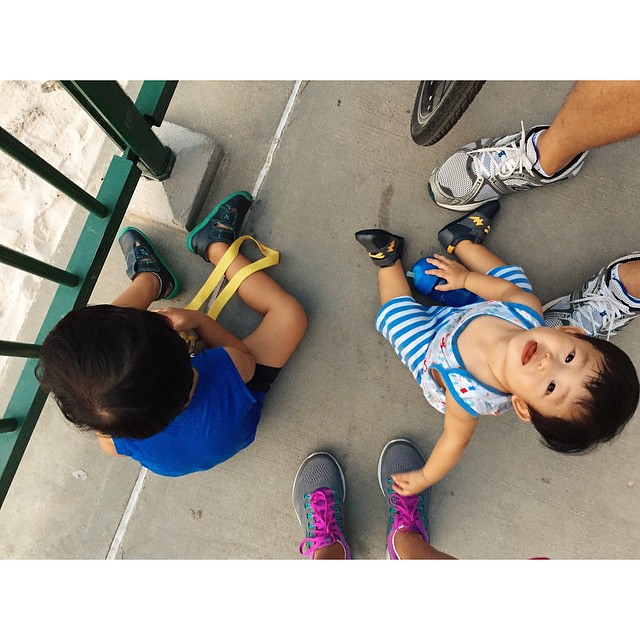 As the sky darkened, we made our way home. By this time, the heat had dissipated and the wind was rushing in our ears. Our legs worked extra hard so that we can get back as quickly as we could, since Zac had resumed his pissed off yelling. To placate him, we started singing as we cycled and so we became the band of singing cyclists. Only, our choice of songs were limited to Aidan’s repertoire and we were warbling, loudly, tunes about children rolling out of bed and Old MacDonald’s farm. And once we were home, the littlest one was quickly put to bed while the rest of us feasted on frozen pizza while catching the SEA Games on the telly.

So it didn’t turn out to be a disaster after all. And as I rode, all I could think of was how this is home and how these are the memories that I want my kids to have. We may not own anything fancy but these rides with mama and papa, these are the things that they will remember. Not the expensive toys or beautiful clothes.

I hope that one day, when my boys are all grown up and perhaps fathers themselves, they will recall that once upon a time, their parents took them cycling and they caught beautiful sunsets and they felt free, happy, contented and so, so loved.

(Okay, maybe Zac won’t remember that he screamed for most of the ride. He did feel loved and happy and free after we took him out of the seat.) 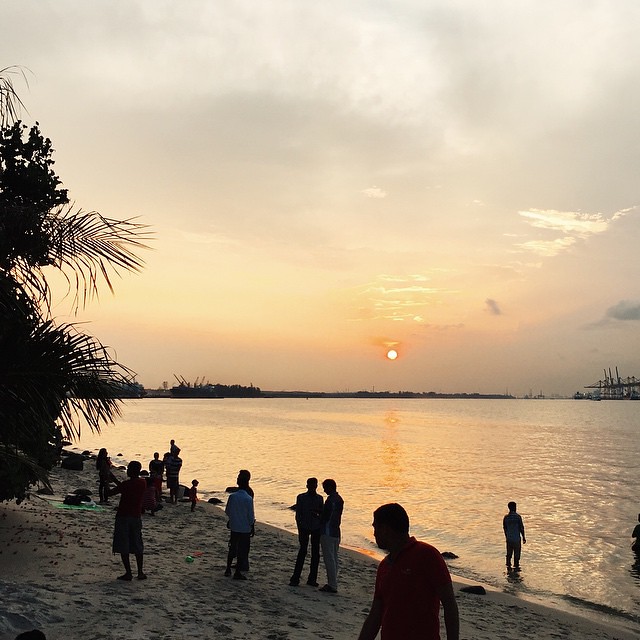