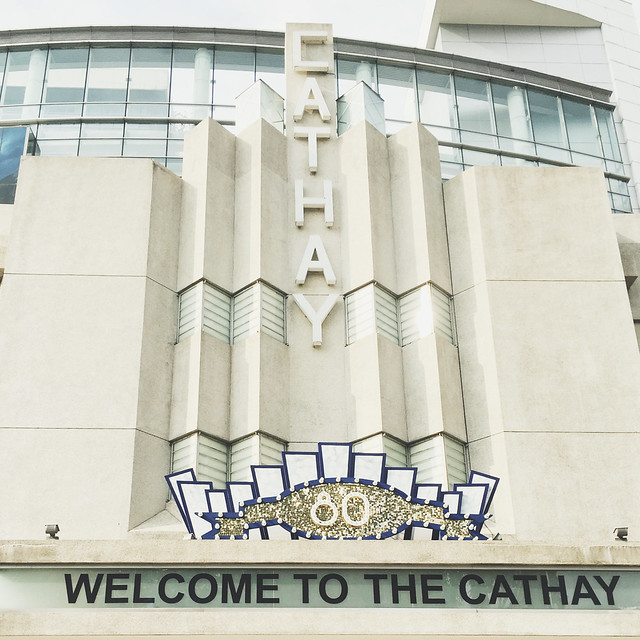 I literally grew up here.

Back in the ’80s, My aunt and uncle owned the snack/drinks store at The Cathay and my mama worked for them. Weekends were spent at the cinema. In the mornings, I would board SBS number 25 with my mum for that one-hour ride into town. Of course, buses were not air-conditioned then but I don’t remember being put off by it. In fact, I loved to sit by an open window, feeling the sting of the wind whipping on my face. I still love that sensation now, come to think of it.

At the store, my uncle was kind enough to let me sit on the counter top, behind a dizzying array of snacks that were on offer. He used to let me scratch those lucky draw cards that came with cartons of packet drinks, which was SO! MUCH! FUN! for a tot. And when I was done with running the business, the cinema attendants would quietly sneak me into the theatre. Inside the darkened theatre, I would perch on the steps to watch movies.

One movie that remained steadfastly in my memories was The Fly. Because it FREAKED ME OUT SO BAD. I was terrorised and had nightmares for ages. In fact, I can still vividly remember some scenes from that movie. TRAUMATISED, I WAS.

Mmm, not the best movie to show a preschooler, on hindsight. Clearly nobody thought, then, to think about the movies that a little person could sit in on. (Note to self: Do not screen shows featuring man transforming into a human-sized, gooey mess of a fly to my children.)

When the owners closed the cinema for renovations, my mum and aunt and uncle lost their jobs. And when it eventually reopened again, it had become nothing like the Cathay that I knew. Everything was so new and snazzy and shiny and bright.

BUT. The greatest thing was that the owners re-hired some of the old cinema attendants whom I grew up with. There was once my cousins and I went to watch a movie at The Cathay and the attendants recognised them! It was so amazing.

Come to think of it, it was a pretty simple childhood that I led. But wow, some of the memories that I still retain after so many years – who would have known? Something to keep in mind as I totter along this parenting journey which has no instruction manual and no back button to push.