For his birthday this year, I got the man (and I, heh heh) a pair of tickets to watch Les Misérables. Really, it stemmed from the fact that I had no idea what else to buy for him and I thought that a day at the theatre catching the holy grail of all musicals was just perfect.

You see, the two of us met through a love for singing. And we were lucky enough to sing together for seven years. We sang, and travelled the world, and won accolades and made some pretty beautiful memories together. And in our world of choristers, Les Miserables was like the ultimate goal.

We dreamt of putting up a production like this in Singapore. We would have loved to try. We thought of who amongst us could take on the roles of Valjean, Eponine etc. And we memorised the lyrics and sang together – at the pub after practice, at someone’s place, at the beach, outside the arcade.

I first watched the musical when I was 14. It was the first time the production was staged in Singapore and my mother had struck the lottery. So off we went! The seats were high up in the stalls but no matter, I remembered being so entranced by the singing, the backdrop, the plot. I cried when Eponine died.

In the interim, I fell in love with the 10th anniversary concert cast, the so-called dream cast. I mean, it WAS the dream cast. Colm Wilkinson, Ruthie Henshall, Lea Salonga, Michael Ball, Philip Quast – they were perfection! Just watch the video of Ruthie Henshall singing I dreamed a dream and you will understand. I still get goosebumps to this day.

So 20 years later, who better to watch this with again, other than my partner in life?

Let me tell you, even as the prologue was playing, I had tears in my eyes. The iconic strains that rose up majestically in the air, whipped into life by an Adele lookalike (from the back) conductor (YAY LADY CONDUCTOR!). And the tears kept threatening to fall, scene after scene. It was all I could do to stop myself from bawling AND singing loudly along, as if it’s a luxe karaoke session.

It was such a dream come true. (Especially after that awful movie adaptation. What can I say, I am a purist.) ((Also, watch this. Just pure magic.)

I had gotten us really good tickets so we were close enough but not too close to the stage. And that gave us a fantastic view of every expression, every turn of the prop, every flicker of gunfire. My two years as a theatre student in JC – and a choir girl – certainly opened my eyes to the wondrous tricks and mechanisms behind the lighting and the props. That Javert death scene was so clever! And I can tell you that it sure as hell ain’t easy to sing and dance and act at the same time! Most people can barely handle one task, let alone excel in all three.

Kudos to the cast of this production – they were perfect for their roles. The actors playing Valjean and Javert stand out, as expected. Their exchanges, their duets were so utterly perfect while the singer portraying Eponine really reminded me of Lea Salonga.

The only quibble we had was with their singing: The actor portraying Enjolras, for instance, was constantly out of rhythm! And he had this annoying habit of sliding into his notes. My mind was screaming at him to hit his note cleanly. But that’s the choir girl in me protesting, heh.

As usual, Cosette irritated the shit out of me. I don’t have patience for whiny women looking doe-eyed and singing about a heart full of love. No, please, STFU. Just get to work, like Eponine, yah? And the man and I agree that Marius never impresses. NEVER. No matter who plays Marius, he always comes across as wussy and not able to hit the high notes well. Okay, maybe with the exception of Michael Ball. Hah – talk about bias!

All in all, I am so, so glad that I splurged on this experience. It was a beautiful afternoon spent away from the boys, away from the noise and grime. I immersed myself into the magical world of the theatre and it was worth every penny.

Of course, immediately after, I swapped my pretty red dress and Gucci slingbacks for Birkenstocks and shorts to pick up the boys. Ah, all in a day’s work. 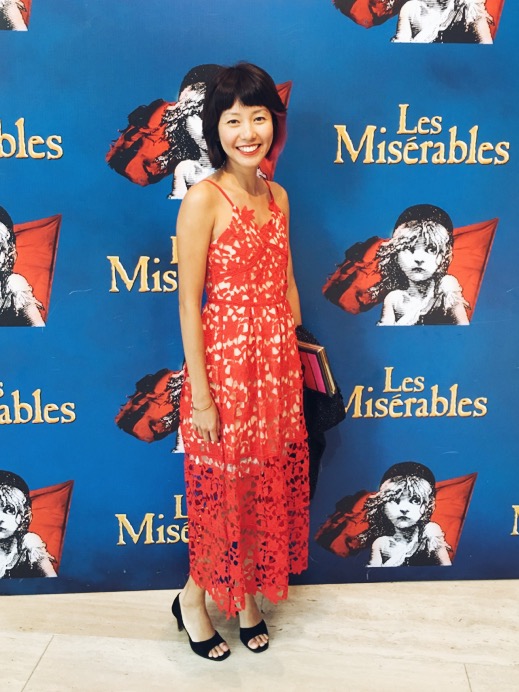