It’s been more than two weeks since my left eye started failing on me. Ever since I received the right diagnosis, everyday has been a relief. Frankly, I don’t know how I lived through that week when it was mis-diagnosed. That had been hell.

But I am ahead of myself, let’s start at the beginning.

I had been solo parenting for two weeks and congratulating myself on doing fine so far. The Tuesday after the haze, my left eye turned red but since I was prone to dry eyes, I chalked it up as an after effect of the haze and left it as such.

By Sunday, it was clear that something was wrong. My eye was red and weepy, and I was feeling poorly. I stayed home alone with my littles, and managed to do all the cooking, washing up, playing, reading, napping etc. Thank god they were cooperative!

When I got to the GP on Monday morning, I was diagnosed with conjunctivitis and prescribed antibiotics, both oral and in the form of eye drops. By then I was in a lot of discomfort. The eye was swollen, so much so that I was unable to open it, and it hurt so much. I crawled home to hide under the covers in my darkened bedroom and slept the day away, rousing only to drive to pick up my children.

I went back to work on Tuesday and Wednesday, and there was a mountain of, well, crap to clear. There were scripts to be read and re-marked, and meetings to be met.

Those two days were awful. It felt like someone was drilling inside my eye socket and my head felt like it was going to explode. My eye was still swollen, weepy and red. My vision was blurred and light hurt my head. In the evenings, after I had fed, bathed, read and put the boys to bed, I would collapse in my own bed, grateful to finally rest. As I shut my eyes each night in exhaustion and pain, I prayed that I would wake up with clear vision.

By Thursday, it was apparent that the medicines had absolutely zero impact on my condition. I went back to the GP, who prescribed a second round of antibiotics and eye drops. He told me that if I didn’t get better over the long public holiday weekend, he would refer me to a specialist.

I was anxiety-ridden and fearful by then. Why didn’t the medicines work? Was I housing some kind of mutant super bug? Was my eye going blind? How long more can I hold out, doing this all on my own? What would happen to my kids?

Friday morning, I woke up to the husband kissing me hello. He was home! I almost cried in relief, it felt like I didn’t have to shoulder this physical burden on my own anymore. As I debated between going to see a specialist and waiting it out, I received a text from a concerned colleague.

“I will see how it goes after the weekend, if the new meds work,” I wrote.

Her reply came quick: “I don’t think you should wait.”

And suddenly it felt as if the cobwebs had been shaken off. Yes, why the hell was I waiting?

I went back to the GP for the third time, this time blessedly with the husband in tow. He took one look at my eye and said, “It is not getting better huh.”

The sweet clinic assistant made some calls on his behalf. The nearest public hospital was full, unfortunately, and the earliest appointment was the next week. Singapore National Eye Clinic could see us, but it would be on walk-in basis and the waiting time was estimated to be between three to four hours.

I panicked. By that time, I had hit the edge of my tolerance level, I just wanted the pain and the swelling to be fixed. Did I want to wait? NO.

A quick search on Facebook yielded Dr Leo Seo Wei’s name – fellow parents recommended her as being good with kids. Hell, if she was good with kids, she’d definitely be good with me. I placed the call and mercifully, she had an open slot at 2pm.

When we got there, the assistants ran some standard eye tests for me. They could barely get any reading out of my left eye, it was so swollen. After almost two hours of testing and waiting to see if my pupil would dilate and testing and waiting, it was my turn. Finally, the ophthalmologist sat me down behind her sophisticated and complicated gizmo and peered into my eye.

“You do not have conjunctivitis,” she declared. “You have what we call uveitis. Your eye is inflamed.”

In that moment, I felt alive again. I had a diagnosis. It wasn’t conjunctivitis, I wasn’t housing some potent bug, no wonder the antibiotics didn’t work.

In a nutshell, uveitis is a rare condition where the eye is inflamed. The scans showed a cloudy eye, so swollen that nothing could be seen. It’s considered an ophthalmic emergency. It was infinitely WORSE than having conjunctivitis but I was just so happy that someone finally knew what was going on.

The doctor was worried that the inflammation had gone on for so long that it would compromise my sight. After another two rounds of scans (because the eye was just so swollen that it could not open wide enough), she finally determined that the inflammation was contained and I would likely get my sight back. But because it had gone on for so long, the recovery was likely to be a slow one. There was no way the GP could have diagnosed this for they did not have the tools to examine the eye like she did.

She prescribed a series of steroids drops for me and scheduled a review the next day. And after faithfully dosing my eye every hour with the drops, she said the meds were working when I saw her again on Saturday. I was given oral steroids for a few days and told to see her again on Tuesday.

Since then, I have had and will be having weekly reviews with her until the inflammation clears up. It is costing me a lot of money, but I’d gladly pay. Because my eye is saved. I know what I am suffering from and there is a cure. The recovery will be long but I know I will get there. I no longer live in the dark, both literally and metaphorically. That week of pain and darkness was truly awful – and it was dreadful to be going through it alone. Thank goodness for kind colleagues, who asked about me every day.

But the scary thing, really, is how it struck me. According to the doctor, there can be no particular reason but if it recurs, then it could be a sign of an autoimmune disorder. I am taking it one step at a time and praying that my sight will be restored.

Right now, my sight is still hazy, like there is a white film over it. It’s still sensitive to light and I get a headache from the imbalanced vision sometimes. But I am so, so, so thankful that I made the decision to see a specialist. It probably saved my left eye and a whole lot of heartache. 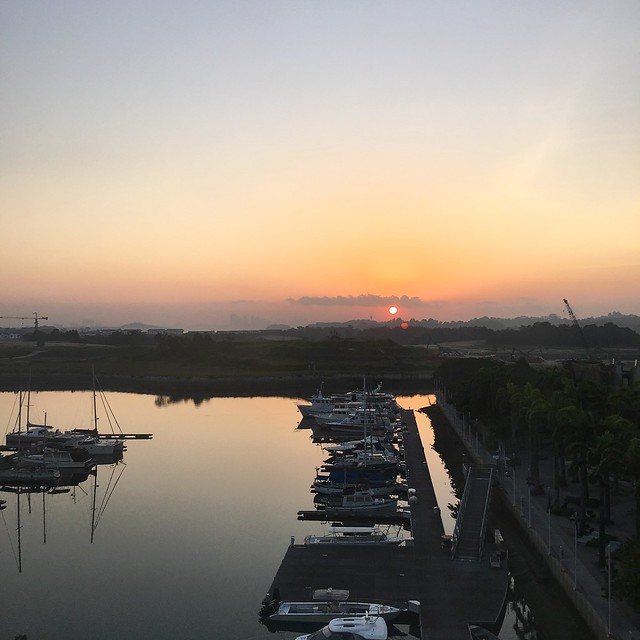