(I am back! Well, sort of. I graduated from my master’s course AND sold/bought/renovated our home so things are still a bit crazy around here. One month after graduation and it still has not sunk in that I. HAVE. GRADUATED. That realisation will kick in soon and I will write soon but in the meantime, I am excited about something else!)

The man that I married is a geek. He loves tinkering with computer things. When I was pursuing my master’s, one of the subjects that killed most of my brain cells was on the measurement of electronic audience. I know, I know, I was also all -_- when I started the subject.

Anyway, the husband sweetly tried to explain how web beacons and something something worked and all I heard was “blah blah packet sent here blah blah sent there”. Suffice to say, I was a terrible (live) audience, my eyes literally glazed over and till today, the technicality of it all eludes me. And that is a fate that I would like my boys to avoid. In this technologically driven world, they need to be adept at understanding and mastering technology such that they are not only consumers of technological content but producers too.

Actually, one of the things that I really want them to pick up is coding. I think coding requires a level of logical thinking, it teaches patience and above all, it allows them to be creative while having fun. These are skills that are necessary for kids to survive in tomorrow’s world. So I am always interested in all things educational and tech-related for them.

Last year, we went to Tech Saturday (Upsized), the tech carnival for everyone (SERIOUSLY, they have activities for, like, four- to 70-year-olds or something) and the kiddos had fun coding and playing with bots. We also attended the Little Artists for VR workshop, where Aidan had fun creating his own VR world (while Zac was busy terrorizing the room…in his defense, he was not quite three so..). This year, we are looking forward to go back again. 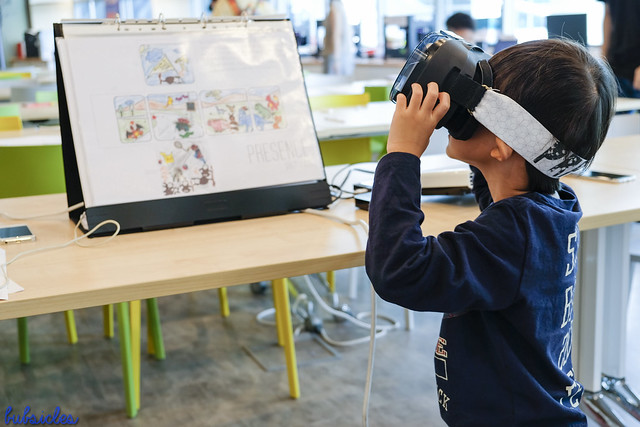 I have signed the boys up for the Augmented Reality Animal Flashcards workshop, only because they are nuts over AR (thanks, Pokemon). They’ll get to search for animals and feed them, all via AR!

If you are keen, here are five other activities that I would love to check out when we are there.

AI Goalkeeper
When we were in Zurich, we visited the FIFA World Football Museum. It was an incredible place, filled with really cool multimedia exhibits. But what made my boys go animal-creature-wild-thing-wild was the gaming zone, where they could play football in a pinball-styled setting. They were all over it, trying to kick the balls into the net to score points. I reckon they will be super excited over the AI goalie, trying to beat it. (They are no Messi though, so I think the AI will triumph over them.) This was also developed by Temasek Polytechnic students, and I am totally not biased even though I happen to teach there.

Make a Light-Up Greeting Card with Circuit Stickers
Since Father’s Day would be approaching, why not get your pre-schooler to make a greeting card that lights up with an LED? Dads – geeks and non-geeks alike – will surely appreciate this gesture while the kiddos can learn about the electrical circuit. Don’t worry, the LED is safe and this activity is meant for four- to six-year-olds accompanied by a parent.

Design and Print a 3D Model
This one is for the big kids aged 17 and above (ie. ME. And probably YOU). You get to learn more about 3D printing, and even design your own 3D model. I first saw a 3D printer at PIXEL (same time as when A was attending the VR workshop) and it’s seriously fascinating. I’d ditch the kids with their geeky papa (they’d probably go to the Lego booths and code a Lego bot or something) and do this for me.

Star Wars Jedi Challenge
To find out if the force is strong in you, you can put on a headset and wield your very own lightsaber in the Lenovo’s Starwars Jedi Challenge Augmented Reality experience. I have always wanted a purple lightsaber, like Mace Windu‘s, bless his very dead Jedi soul.

IMDA Lab on Wheels
My boys have a strange fascination with buses and I think the IMDA Lab on Wheels might excite their easily excitable selves. The interactive buses – there are two of them at the event – have AR/VR/MR headsets on one while the second requires your to solve puzzles in order to ‘escape’ from the ‘escape bus’. 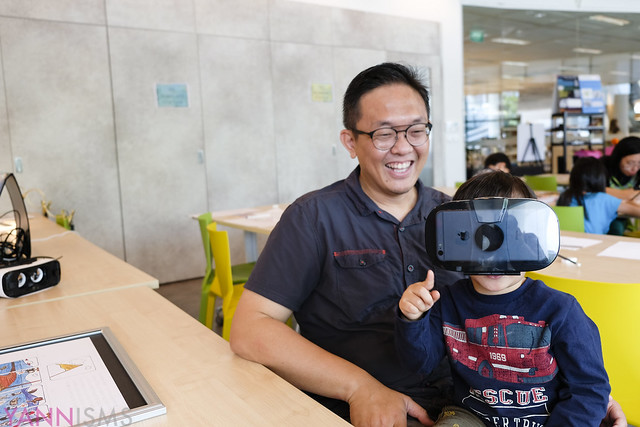 Thank you IMDA for sponsoring this post! We are looking forward to being geeks at Tech Saturday (Upsized) 2018!